May parental refusal to vaccinate a child, under the present circumstances, be constitutionally considered child neglect?


(i) whose physical, mental or emotional condition has been impaired or is in imminent danger of becoming impaired as a result of the failure of his parent or other person legally responsible for his care to exercise a minimum degree of care

(A) [Eff. March 7, 2019.] in supplying the child with adequate food, clothing, shelter or education in accordance with the provisions of part one of article sixty-five of the education law, or medical, dental, optometrical or surgical care, though financially able to do so or offered financial or other reasonable means to do so, or, in the case of an alleged failure of the respondent to provide education to the child, notwithstanding the efforts of the school district or local educational agency and child protective agency to ameliorate such alleged failure prior to the filing of the petition;  or


(ii) who has been abandoned, in accordance with the definition and other criteria set forth in subdivision five of section three hundred eighty-four-b of the social services law , by his parents or other person legally responsible for his care.”


Note in the definition of neglect the requirement that the parent has to exercise only a “minimum degree of care”.  Not “good” care, not the care that a social services worker, or a teacher, considers “appropriate” – but a “minimum” degree of care.


Another example, social services increasingly charge parents for failure to follow “advice” of school officials to subject the child to mental health counseling and/or put him on mind-altering drugs.

Of course, a teacher’s “advice” is not medical advice, and, a parent’s refusal to follow medical advice of a non-medical professional cannot possibly constitute failure to exercise a minimum degree of care that the law requires.


The parent should bear in mind that the burden of proof in such proceedings is on the social services.  If the parent has never allowed his child to go to “counseling”, even to a school “counselor” who would construct a mental disability out of thin air in order to have the school receive additional funds for educating a “child with a disability”, social services will not be able to prove that the child ever needed counseling, and that the parent’s refusal to allow such counseling was medical neglect.

Vaccinations and other doctors’ advice

At the same time, New York law mandates public education of children from K to 12, from 5 to 18 years of age, and not bringing a child to school, in the absence of documented homeschooling, may be charged against the parent:


o   as an educational child neglect;


o   as a medical child neglect; and


o   as a crime of misdemeanor, Endangering welfare of a child, Penal Law Section 260.10.

Yet, nobody cancelled yet the right of a parent to informed consent to medical care of the child.

And, remember, child neglect is failure of the parent to exercise a “minimum degree of care”, FCA 1012(f)(i).


Side effects and counter-indications for the vaccines can be found at the government portal of information, Daily Med[1], with a free access to it on the Internet.


Since it is a government portal of information (extension .gov), everything published there is a public record admissible in court.


The parent may find brand names of vaccines to verify their side effects in the government vaccine schedules at the CDC website[2].

Let’s take, for example, the measles vaccine – the subject of controversy and litigation in New York.


First, note that the government information from the Center for Disease Control (CDC) brands the measles M-M-R vaccine as a “live attenuated” vaccine, meaning that live viruses are introduced into the child’s body with this vaccine.

This is the information that has come out about this vaccine.


This is the “description” of what this vaccine is:


The cells, virus pools, and fetal bovine serum are all screened for the absence of adventitious agents.


Before reconstitution, the lyophilized vaccine is a light yellow compact crystalline plug. M-M-R II, when reconstituted as directed, is clear yellow.”


Not only the vaccine contains foreign proteins:


Of course, children are not tested before the de facto mandatory vaccination for allergies to all of these components.


Note how tricky the manufacturer of the vaccine (MERCK) behaved when it listed, in the official leaflet, the official listed counterindications to the M-M-R-II (measles-mumps-rubella) vaccine:


Hypersensitivity to any component of the vaccine, including gelatin.{40}


Do not give M-M-R II to pregnant females; the possible effects of the vaccine on fetal development are unknown at this time.  If vaccination of postpubertal females is undertaken, pregnancy should be avoided for three months following vaccination (see INDICATIONS AND USAGE, Non-Pregnant Adolescent and Adult Females and PRECAUTIONS, Pregnancy).


Anaphylactic or anaphylactoid reactions to neomycin (each dose of reconstituted vaccine contains approximately 25 mcg of neomycin).


Febrile respiratory illness or other active febrile infection. However, the ACIP has recommended that all vaccines can be administered to persons with minor illnesses such as diarrhea, mild upper respiratory infection with or without low-grade fever, or other low-grade febrile illness.{41}


Patients receiving immunosuppressive therapy. This contraindication does not apply to patients who are receiving corticosteroids as replacement therapy, e.g., for Addison's disease.


Individuals with blood dyscrasias, leukemia, lymphomas of any type, or other malignant neoplasms affecting the bone marrow or lymphatic systems.

Primary and acquired immunodeficiency states, including patients who are immunosuppressed in association with AIDS or other clinical manifestations of infection with human immunodeficiency viruses;{41-43} cellular immune deficiencies; and hypogammaglobulinemic and dysgammaglobulinemic states. Measles inclusion body encephalitis{44} (MIBE), pneumonitis{45} and death as a direct consequence of disseminated measles vaccine virus infection have been reported in immunocompromised individuals inadvertently vaccinated with measles-containing vaccine.


Individuals with a family history of congenital or hereditary immunodeficiency, until the immune competence of the potential vaccine recipient is demonstrated.”


The parent cannot even have an ability to give informed consent for introducing this vaccine into his child’s body because, most likely:

1)     He is not given information about all the ingredients that are introduced into the child’s body with the vaccine, because

2)     There are components of the vaccine that are not listed and are secret “other buffer and media ingredients”; because

3)     Children are not tested for “hypersensitivity” to such vaccines before they are introduced into their bodies; and

4)     Most of parents do not know what those words mean and what kind of allergies they can cause.


Yet, the possible side effect of the vaccine is “anaphylactic shock” (death), and the parent MUST have a right to decline to give consent to introduce into his child’s body something that may cause the child’s death – until:

1)     All the ingredients of the vaccine are publicly listed;

2)     All materials and results of clinical trials in children of this vaccines are publicly listed;

3)     Until each parent is given that list of components and explained possible consequences of exposure of his child to each of these ingredients;

4)     Until each child is tested for hypersensitivity of every component of the vaccine prior to that vaccine being put into the child’s body.


Whenever death or serious bodily injury is listed as a possible side effect and wherever any components of a compound that is to be introduced into a child’s body is unknown, a parent has no ability to give a proper informed consent to vaccinate his child, and refusal to vaccinate his child may not be deemed, as a matter of law, as failure to provide minimum care of the child and child neglect.

If the school does not allow the child to be educated in school because of the parent’s withholding of informed consent to vaccinate on these grounds, the cause of the child not receiving the education is the school and not the parent, and educational neglect or criminal charges for “endangering welfare of a child” may not be sustained as a matter of law.


Merck has shifted its own liability for what happens to the child to the child's doctor to check each child for hypersensitivity for all ingredients of the vaccine.


But, doctors cannot do that checking fully either, since there are unknown “buffer and media ingredients” in the vaccine.


At the same time, the government has deprived children whowere injured or died from exposure to vaccines of their right to sue manufacturersof the vaccines for damages, and is thus preventing children from even establishing the causal connection between their injuries and the vaccines.

Under such circumstances, parent cannot be expected by the government to give informed consent – while information about safety of the vaccines is deliberately blocked by:

I I wonder - have these issues, based on public information, in open access, been raised in the New York vaccine litigation?

I have finally published today the first of the books I have been working on for a long time - the beginning of the series "Defense of ... 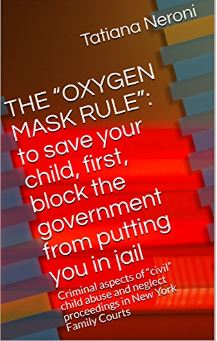